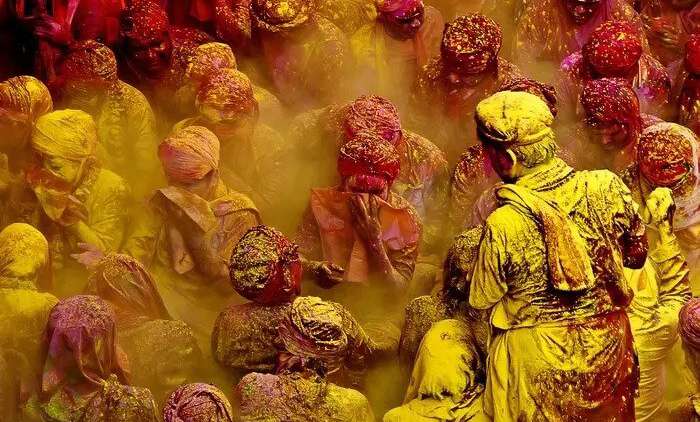 Holi festival in vrindavan is celebrated with coloured water and Gulal, and tradition of Lathmar Holi Most of the people doesn’t know of the truth that the Holi is being celebrated for 40 days in Mathura, Vrindavan .

Holi is also called 'THE FESTIVALS OF COLOURS ', and people celebrate the festival by smearing each other with paint, and lathmar is famous all over Mathura Vrindavan ,Guest are welcome to celebrate their upcoming Holi, experience never ever had before .

Women   hitting men with the help of Laathis and men protecting themselves using metal shields. These Holi celebrations are taking place around Mathura. Lathmar Holi celebrated before 4-5 days from actual Holi Date. It takes place at Barsana near Mathura Vrindavan , you can plan your HOLI FESTIVAL with ANANDAM CLARKS INN SUITES VRINDAVAN & share your personal lathmar Experience with ANANDAM TEAM !

Nandgaon and Barsana is the destination from where people goes to Vrindavan and this is where they are at their violent. On the day of Holika Dahan which is called choti Holi as per the Hinduism  , Flowers Holi also called as phulo ki holi  is celebrated in Vrindavan at around 4.00 pm, the entrance of the adore Banke Bihari  ji Temple are opened to let in a flock of people, Every one enjoy a different different types of flowers being thrown at Banke Bihari ji Figures by priests.

On this festival, the Banke Bihari ji Temple testimony the impressive festivities – the kind of HOLI FESTIVAL  everyone is conventional to with people throwing and smudging  colours to each other , Holi celebrations are accompany with Krishna  ji Bhajans and dance blasting at higher sound.